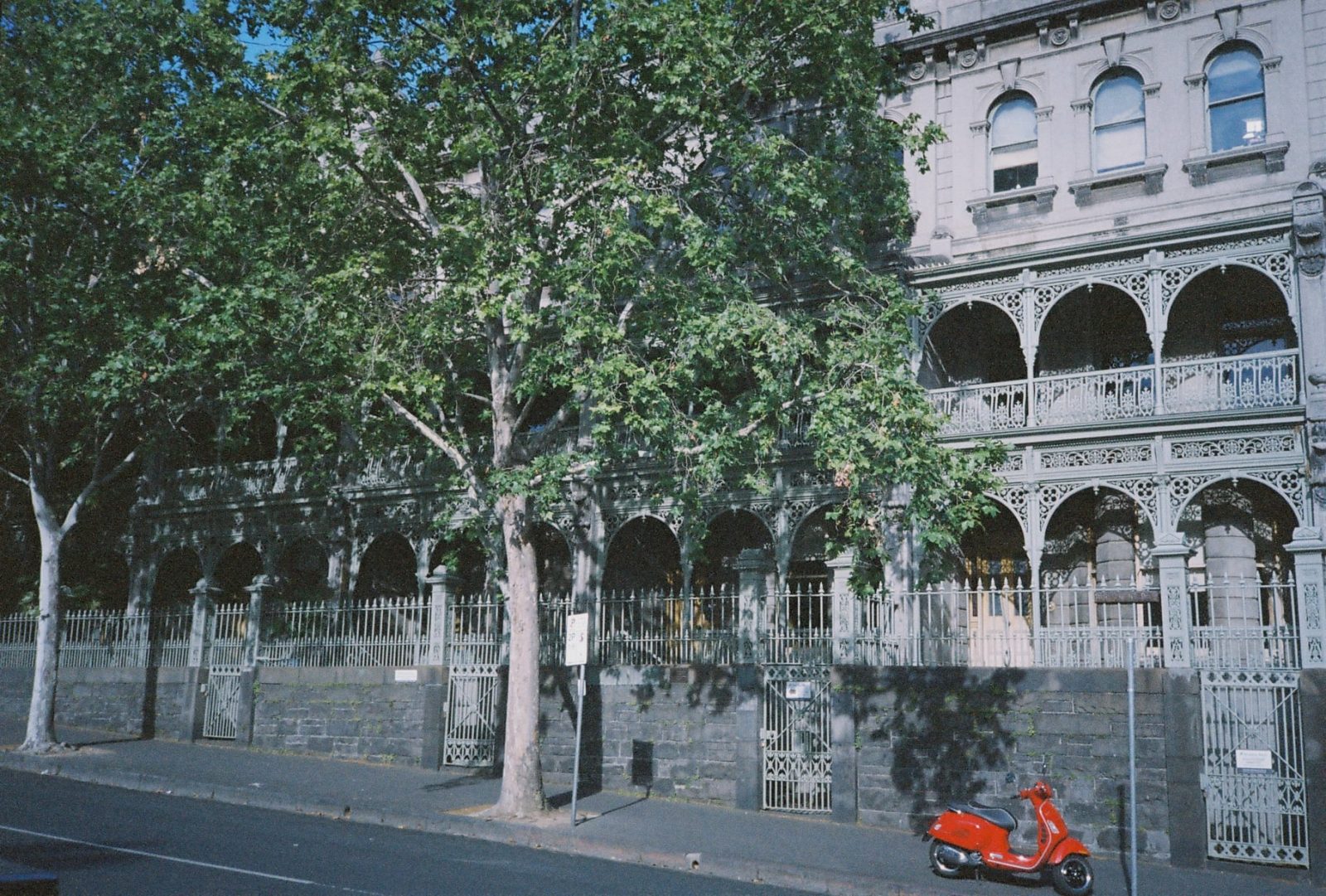 A new home for Open House

Open House Melbourne now has the privilege of calling Tasma Terrace its home. In November 2019 we packed up a tiny office space overflowing with boxes, signage and high-vis vests and relocated to East Melbourne. A month later, we appreciate the space in new and different ways. The afternoon light through the tree canopy, the detailed leaf motif ceiling rose, the internal winding staircases, the view out to the Great Petition sculpture, (also the parkour taking place on it) and the bells of St Patrick’s Cathedral which ring at 5pm – signalling for us an end to our work day. We have loved getting to know this space, so we thought you might like to know a bit more about it too.

The Story of Tasma Terrace

Looking at the row of terraces today, it’s hard to believe they weren’t all constructed at the same time. In 1878 work began on the first three three-storey houses known then as ‘Parliament Place’. The rest were constructed nearly a decade later in 1886–87. We owe the creation of these elaborate and detailed terraces to architect Charles Webb – think Windsor Hotel, Royal Arcade, Beehive Building in Bendigo, etc. Today, the front section of the building remains virtually intact but without one of the terrace houses (demolished in 1940) and the rear wings (demolished in 1972).

Apart from being an important work by a distinguished architect, its significance lies in the well crafted details and finishes of this three-storey terrace development – a rarity in Melbourne.  Also said to be typically and uniquely Australian, the combination of the richly decorative cast iron and the modelled cement render finish is unknown elsewhere in the world. Other key features include ingenious dividing walls which can be lowered from a cavity above to create separate dining and sitting rooms as required. It also has the only known basement for a three–storey terrace row, the original basement being of particular significance with its arched storage areas.

Open House Melbourne occupies level 1 of number 10 Tasma Terrace. This was one of the three original terraces, of which only two remain. In comparison to the later addition, they are defined by their front gardens. The other terraces built in the second stage left no room for planting as they required staged stair entrances due to the slope of the street. We absolutely treasure the large attractive palm tree that provides us with soft filtered light to our workspace.

Take one look at this grand building and you know it has an eventful history with plenty of stories to tell. Its previous use as a guest house, hotel and restaurant provided respite for many leading figures in politics, finance, as well as more humble occupations like builders and skilled artisans who all worked in the developing CBD. Apparently guests enjoyed its friendly atmosphere and old-world charm, complete with musical piano evenings. The restaurant owner is said to have been a skilled pastry chef who also grew mushrooms for his menu right here in the basement of a Tasma Terrace guest house. Other stories include a sad account of the alleged suicide of Edith Jane Forrester Jubb – the lodging house operator.

From 1966 Tasma Terrace was the property of the Crowns Lands Department and was soon marked for development with hi-rise towers in order to provide additional space for State offices. This sparked one of the biggest preservation disputes in Australia’s history. It even led to the introduction of Australia’s first legislation designed to preserve government owned buildings.

In November 1970, the National Trust Chairman concluded the area was of national importance and the Trust could not condone the demolition of this classified ‘B’ building and called upon the State Government to save it. It was at this point in time the ‘Save Tasma Terrace’ Association was formed and their campaign quickly grew in intensity, while the media took much interest in the rival views. The Trust drew on the talents and energies of academics, students, residents associations and ‘ordinary’ concerned citizens. There are even some current day Open House Volunteers who participated as students in the ‘Save Tasma’ campaign, and what a delight to see their efforts come full circle.

In July 1971, a petition with 5,000 signatures was presented to the Minister for Public Works but State Cabinet remained firm and resolved the terrace must be demolished. The Trust and its supporters strongly opposed the demolition or moving of the building at the expense of public monies. It wasn’t until October 1972 when new legislation – the Government Buildings Advisory Council Act – was established and effectively broke the deadlock. Many possible uses of the terrace had been suggested including a branch for the National Gallery, amenities for Public Servants and retail shopping. The Council in the end, recommend the Trust’s proposal be accepted – and so the decision to preserve Tasma Terrace as the Trusts own headquarters was finally settled. However, parts of the rear of the building were still doomed for demolition to make way for future office developments.

In September 1978, the land was finally written into the Lands Act as being reserved for Historical Purposes. The decision to retain the main portion of Tasma Terrace marked an important turning point in official attitudes towards historic buildings.

Tasma Terrace now houses the head office of the National Trust of Australia (Victoria), a gallery space, and a number of period decorated meeting and function rooms. There’s also a gift shop you can visit any time (fantastic Christmas shopping) and do pop into the cafe located in the basement of number 2 Tasma Terrace.

The sloped setting, surrounding greenery and manicured gardens envelope the site with great charm and provide a moment of reprieve from the congested CBD and inner suburbs. From within its walls you have little idea of the density only a few blocks away.

Tasma Terrace embodies the entrepreneurial optimism characteristic of the boom period in Victoria throughout the 1870s + 1880s. Open House Melbourne is delighted to be part of the story of Tasma Terrace – arguably the most notable terrace housing in Australia. We are grateful for the advocacy work of the National Trust who worked so hard to preserve this site for the enjoyment of Melburnians for many years to come.

Thank you to Samantha Westbrooke, Conservation Architect at the National Trust of Australia (Vic) for providing insights, research material and personalised tours of Tasma Terrace.

Also thanks go to outgoing Executive Director, Emma Telfer. As a parting gift, Emma secured this beautiful space for Open House Melbourne staff and committee members, providing opportunity and growth for the organisation. We will always be appreciative of Emma’s efforts to secure Open House Melbourne a home!