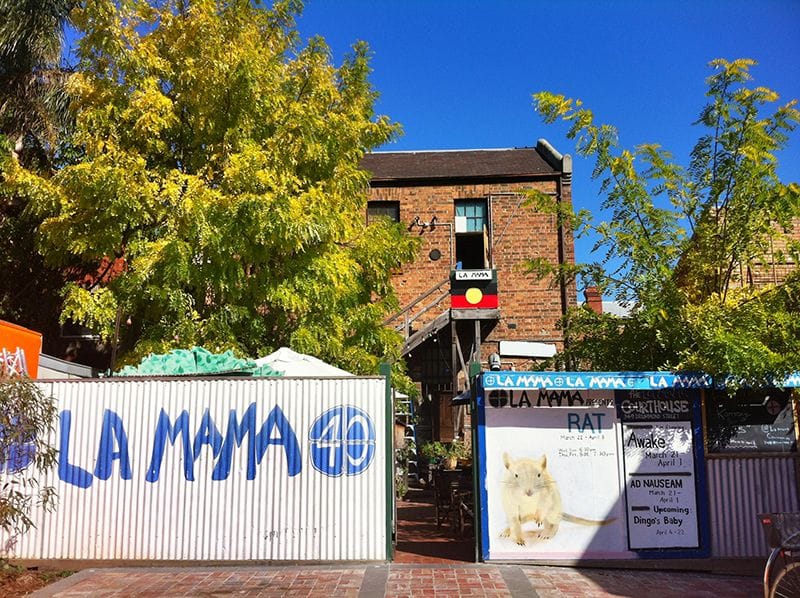 The property at 205-207 Faraday Street Carlton stands in the block bounded by Lygon, University, Drummond and Faraday Streets. Built in 1883 for Anthony Reuben Ford, a Carlton printer, the building had been used as a workshop, a boot and shoe factory, an electrical engineering workshop and a silk underwear factory until the 1960’s. Sometime after that the Del Monaco family assumed ownership of the property, and it was from them that Betty Burstall first rented the building, and established La Mama Theatre in July 1967, modelled on experimental theatre activities at La MaMa Experimental Theatre Company, New York.

Interviews with La Mama CEO Liz Jones, and Project Lead Architect Meg White, and the explanation of the planning model for the future La Mama. The video illustrates the architectural recreation of the La Mama building, showing a proposed integration of building and its purpose.

On the morning of May 19, 2018, La Mama was devastated by fire. On that day and thereafter it was made clear that La Mama would rebuild.

The walls that remained were made secure and the bricks from the gables removed and stored. The rebuild offers exciting new opportunities: the chance to make La Mama far more accessible; the chance to create a dedicated rehearsal space; to improve front of house amenities and theatre facilities; to support the needs of future generations of artists, to make La Mama the best it can be.

The rebuild is a chance to re-imagine what La Mama could be while maintaining and celebrating all that it is. It’s an opportunity to ensure that La Mama can continue to play a vital role in theatre creation in the decades to come.

Meanwhile, just around the corner at 349 Drummond Street Carlton is the current home, office and second performance space – the La Mama Courthouse.

For more information about Rebuilding La Mama, including photos, interviews and details of the Rebuild La Mama Consultant Team.

Watch interviews with La Mama CEO Liz Jones, and Project Lead Architect Meg White, and the explanation of the planning model for the future La Mama.