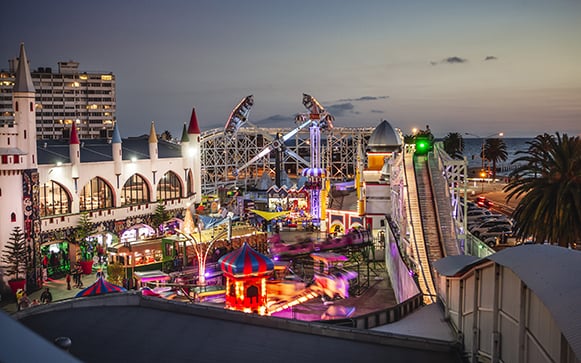 Luna Park, Melbourne’s iconic amusement park, has excited and delighted guests for over 100 years. In 1912, the JD Williams Amusement Company created a futuristic world of crazy possibilities and endless escapes, immediately embeddeding itself into the culture of bayside St Kilda. Today, Luna Park retains the charm of yesterday with rides and architecture from a century ago alongside contemporary thrill rides that still keep guests screaming for more.

The famous Luna Park Face has changed many times over the course of ten decades. Originally it was made from chicken wire, hessian and cement render, and had illuminated eyes that rolled from side to side. The face underwent its most recent facial reconstruction in 1997.

Luna Park’s Great Scenic Railway is 102 years old and is the oldest operating roller coaster of its kind in the world. The track was originally built from 65,674 metres of Oregon pine that was shipped from Canada in 1911.

The carousel is 100 years old and has been perfectly restored to its original glory by a team of experts. A century ago it cost the equivalent of $14,657 plus shipping and was put together like a giant puzzle with hundreds of numbered parts.

The Ghost Train was purchased from the Pretzel Amusement Company (USA) in 1934 and became the symbol of the park after the Great Depression. It was originally called The Pretzel.

Take a behind the scenes tour of the 102-year-old Scenic Railway, a walk-through of the Ghost Train and a look at the mechanics and artwork of the beautifully restored Carousel.

Tours will be conducted on Saturday 25th July at 3pm and 4pm. Pre-book via openhousemelbourne.org from 10am Wednesday 8th July.

Tours will be conducted on Saturday 25th July at 3pm and 4pm.