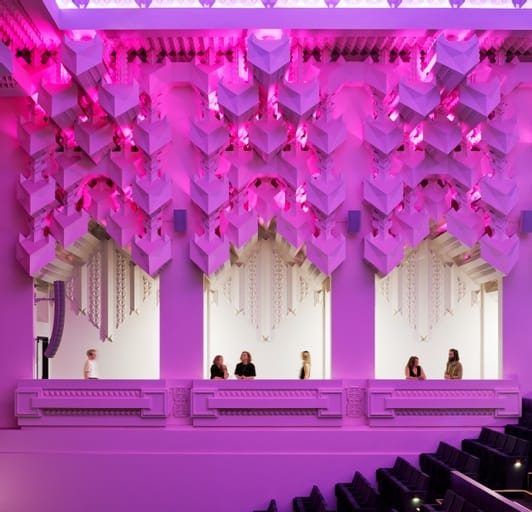 With its spectacular lighting design, elaborate foyers and intricate crystalline ceiling, The Capitol at RMIT University is one of Melbourne’s – and the world’s most iconic theatres.

Formerly known as the Capitol Theatre, The Capitol was originally designed by celebrated architects Marion Mahony Griffin and Walter Burley Griffin in 1924. The Chicago Gothic-style theatre is considered their greatest interior design work. The impressive ceiling was designed with 33,000 plaster crystals lit by thousands of coloured lights, creating the impression of a crystalline cave of wonder. Renowned Australian architect and RMIT alumnus Robin Boyd described it as “the best cinema that was ever built or is ever likely to be built” and the National Trust and Victorian Heritage have registered the Theatre based on its architectural, historical, aesthetic and technical significance.

Between 2014–2019 RMIT worked with Six Degrees Architects to make considerable upgrades to the building and restore The Capitol to its former glory, and retain its significance as an architectural and cultural icon.

“The best cinema that was ever built or is ever likely to be built.” – Robin Boyd

Take a Virtual Reality tour around The Capitol, one of Melbourne’s, and the worlds most iconic Theatres.

Explore the building virtually for Open House Melbourne, scroll below.