The La Trobe University Precinct
will be a little different this year...

IN 2018, YOUR VISIT TO LA TROBE UNIVERSITY WILL BE A LITTLE BIT DIFFERENT.

Rather than heading straight to each building, all visitors will first arrive at the Agora to receive a campus map. From here, you’ll be provided with details on talks and tours of individual buildings and the campus Sculpture Trail.

La Trobe University was created by an act of Parliament in 1964. The first cohort of students arrived in 1967. The original buildings are a product of the Yuncken Freeman Architects Master Plan, with a continuation of new buildings having been added since – designed to complement the original Master Plan, and create a campus which embraces its natural surroundings and bush setting, and at the same time including world-class state-of-the art science & research and teaching & learning buildings.

Sited in Bundoora, the campus encompasses 235 hectares of land, which incorporates the original Mont Park Mental Hospital and its surrounds. The campus is also home to a 30-hectare Wildlife Sanctuary – a living laboratory open to the general public for tours.

A walk around La Trobe University’s campus, gives an insight to how a ‘paddock’ can develop over 50 years into a vibrant University, with the future goal being a University Town, open to the wider community, and being a centre for living, learning, playing and employment.

The diversity of the buildings, and styles, tells the story of how the University has remained true to its origins, yet embraced innovation and sustainability.

Sites available to tour on the Weekend can be seen below…

All visitors to arrive at La Trobe University and head to the central Agora and the Open House Melbourne registration desk. From here, you’ll be provided with details on talks and tours of individual buildings and the campus Sculpture Trail.

In ancient Greece, the heart of any town was the agora – a central meeting place, rather like a public square, which was the administrative, commercial and social centre; it often also had religious and entertainment functions as well (e.g. shrines to gods; athletic competitions in the open space). Ancient Athens was one of the most important and powerful cities in the ancient Greek world – and it was also the place where democracy was invented. In the fifth century BC, the democratic statesman Kimon planted the Athenian Agora with plane trees, in order to beautify it and provide shade in the hot Greek summer.

La Trobe University’s Agora is a direct reference to that of ancient Athens – in its name, function, democratic principles and of course the plane trees! The Agora today is a retail and hospitality space for the University community, with students and staff gathering to eat, relax and be entertained.

The person responsible for the agora is almost certainly A.D. Trendall – he was La Trobe’s first resident University Fellow, a classicist, was involved in the design of the University.

Visitors must have pre-booked tickets to visit The A.D. Trendall Research Centre for Ancient Mediterranean Studies. 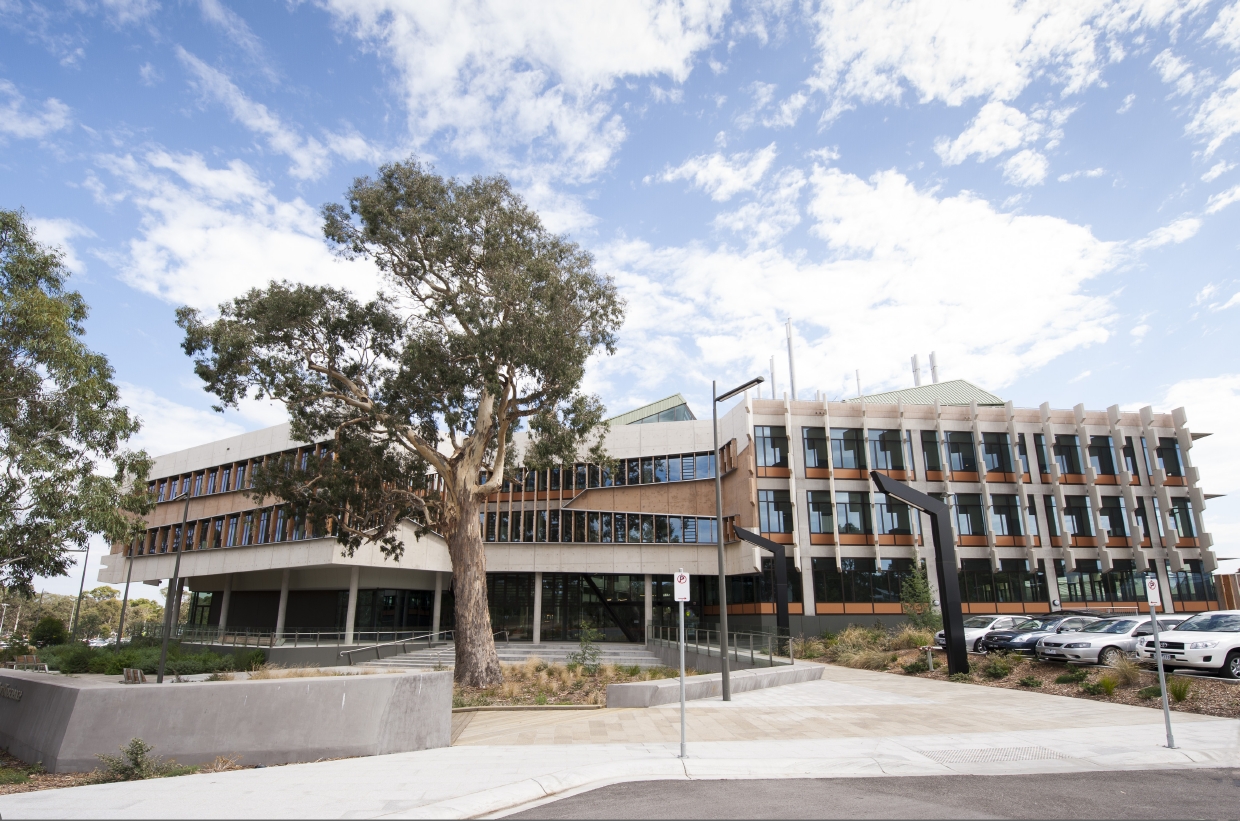 A joint initiative of La Trobe University and the Victorian Government’s Department of Economic Development, Jobs Transport and Resources (DEDJTR) portfolio, AgriBio brings together over 400 world leading government and university scientists, researchers and students in Australia’s only integrated agriculture biosciences research centre. Designed by Lyons Architects and completed in 2012, the facility comprises some 30,000sqm of research laboratories, glasshouses and office space. The co-location of resources within AgriBio allows for unique research collaboration opportunities and a central location for companies to access world-class research and state-of-the-art facilities. The innovative research conducted at AgriBio significantly contributes to improving primary industries’ productivity with scientific achievements that are addressing the challenges to global food security such as the protection of agriculture from disease threats and the impact of climate change on food production. 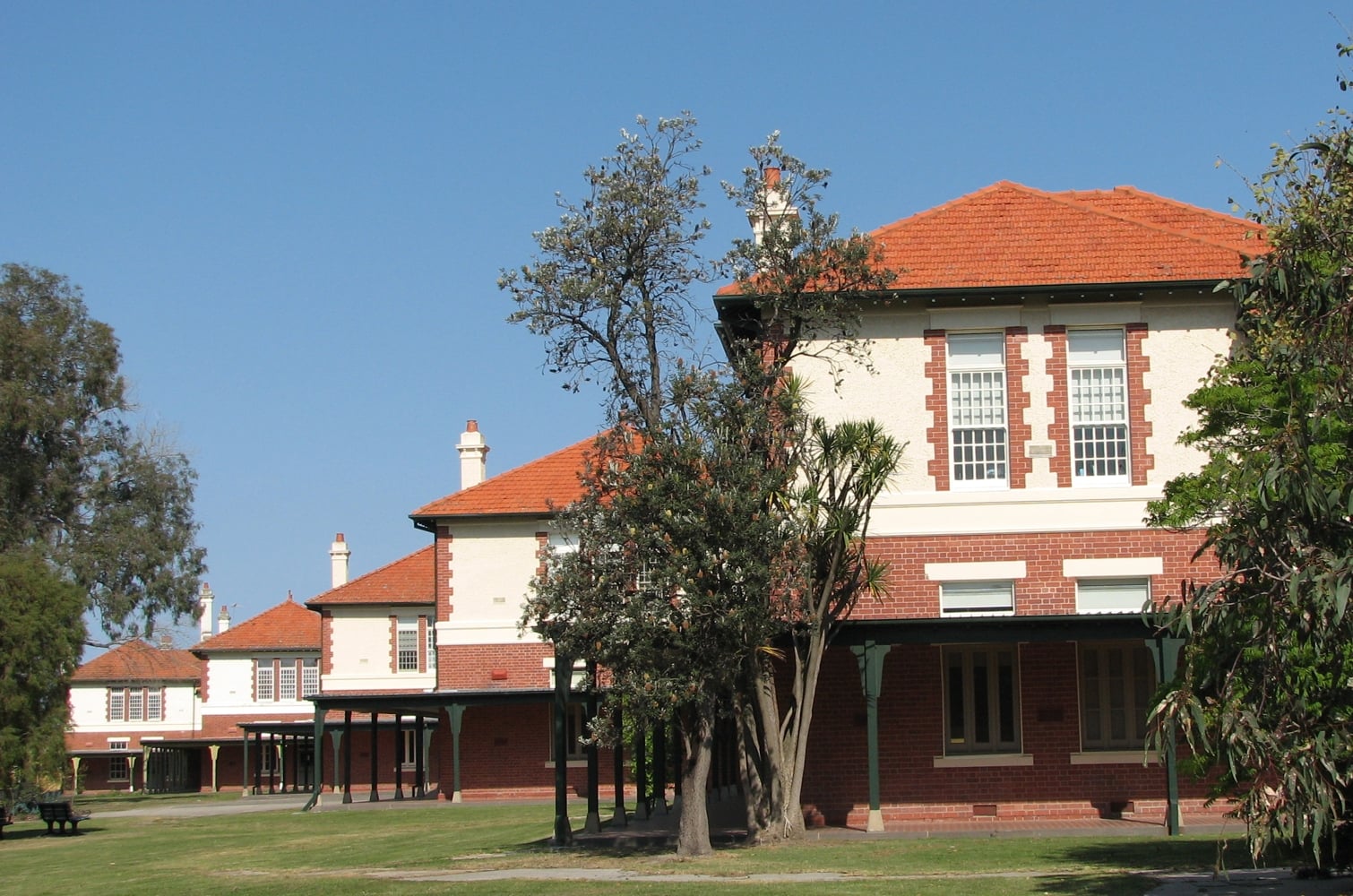 Mont Park Hospital for the Insane was opened in April 1912. The Mont Park Hospital is architecturally significant as a representative example of asylum design in the early 20th century. The Ernest Jones Hall, named after the Inspector General of the Victorian Lunacy Department, was a combined chapel and entertainment hall constructed 1927–30 in the Spanish Mission style and is a rare example of an asylum chapel/hall in Victoria. The designed landscape is of historical and aesthetic significance as an early example of the prominent landscape designer, Hugh Linaker. Many of the original terraces have now been restored and renovated, and are now occupied by La Trobe University for administrative offices. 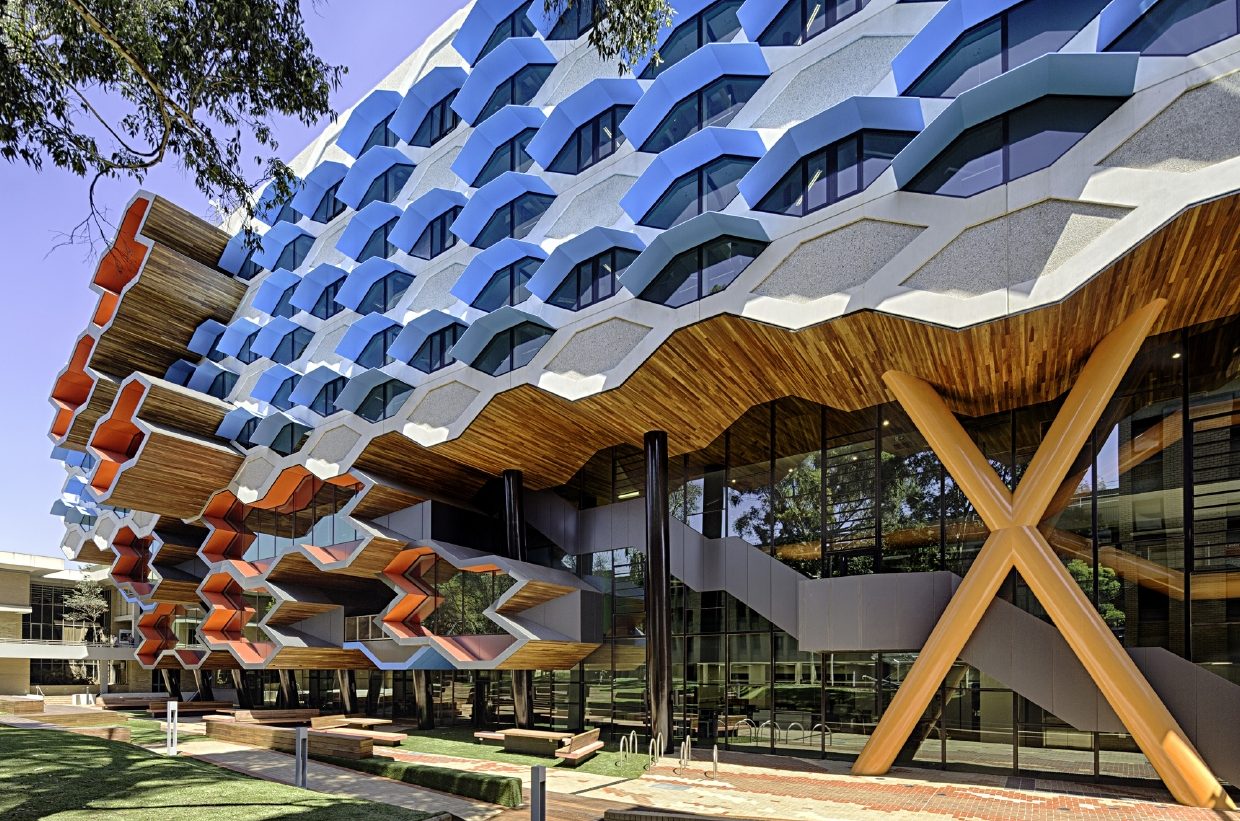 Completed in 2013, the La Trobe Institute for Molecular Science (LIMS) was designed to meet the university’s long-term needs for both student learning and research in the science disciplines. Lyons was the appointed architect following a design competition sponsored by the Australian Institute of Architects. An integral part of the brief was for the project to have a transformative effect in terms of the architecture and identity of the campus, which had previously been built within the strict guidelines for materials and heights. The building has achieved 5 Star Green Star certification using the Education Tool Version 1 through the Green Buildings Council of Australia. LIMS brings together the university’s leading scientists to create new levels of collaboration, and a multi-disciplinary approach to drive innovation and produce translatable research outcomes. The LIMS complex has 56 research and support laboratories, advanced research equipment, a 200-seat auditorium, and over 3,000sqm of teaching facilities. 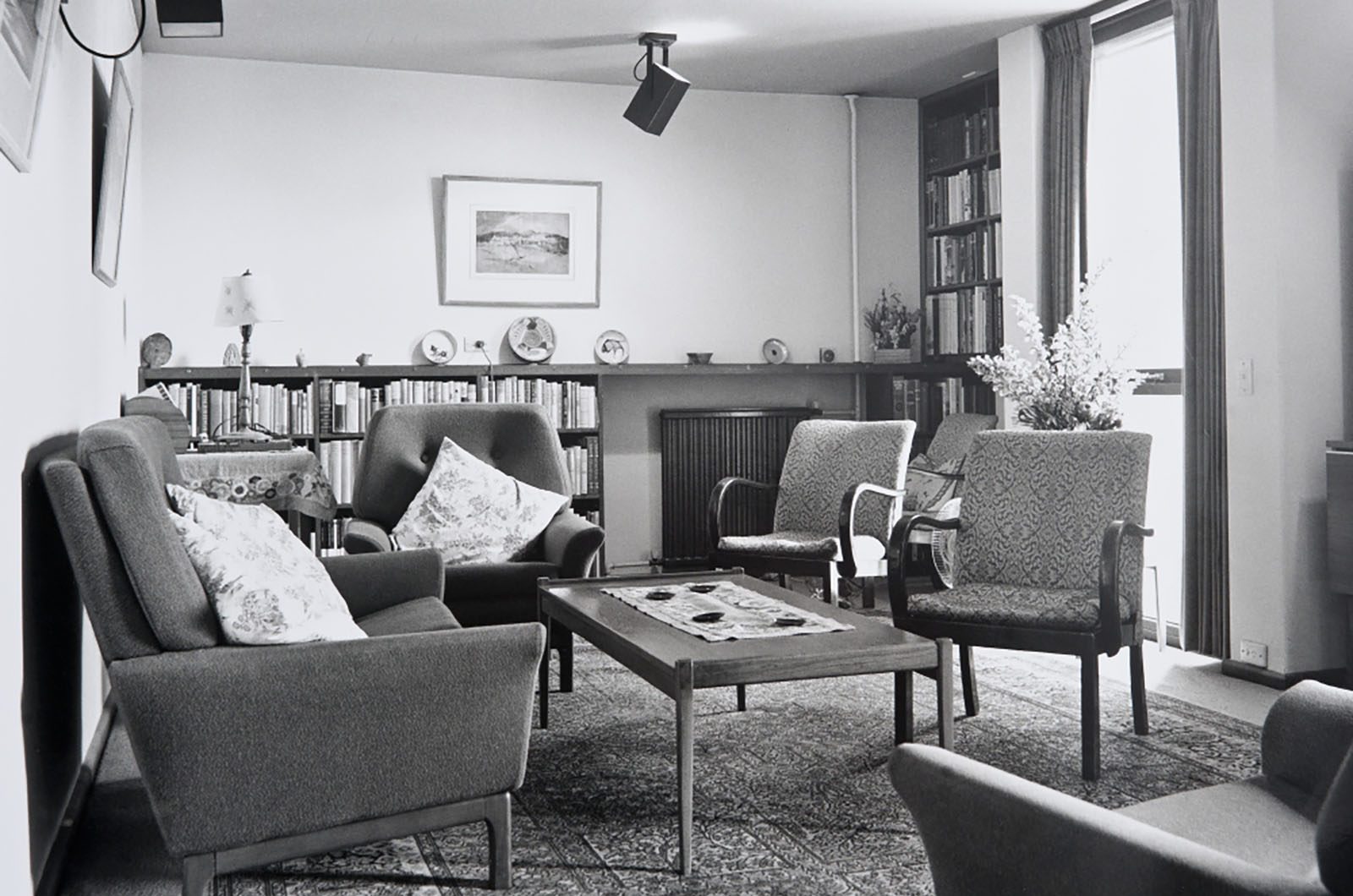 In 1969, as the Modernist buildings of La Trobe rose from the paddocks of Bundoora, the new university welcomed its first Resident Fellow, the internationally renowned Classical Art historian A.D. (Dale) Trendall. An apartment at the top of Menzies College was specially designed for Trendall by architect, Robin Boyd, to be his workplace as well as his home. It contained not only his significant private library but also his photographic archive of some 40,000 images of ancient painted vases. It was here that Trendall produced most of his ground-breaking studies of the art and culture of ancient Southern Italy and Sicily. Trendall bequeathed his library and other collections to La Trobe University upon his death in 1995. Today, the apartment houses the Trendall Research Centre and is a major research resource for both Australian and international scholars. The apartment retains not only the structural and interior features of Boyd’s design, but also Trendall’s personal effects, including his extensive range of Fler furniture (one of Boyd’s preferred designers) and collections of modern art, antiquities, and antiquarian books. 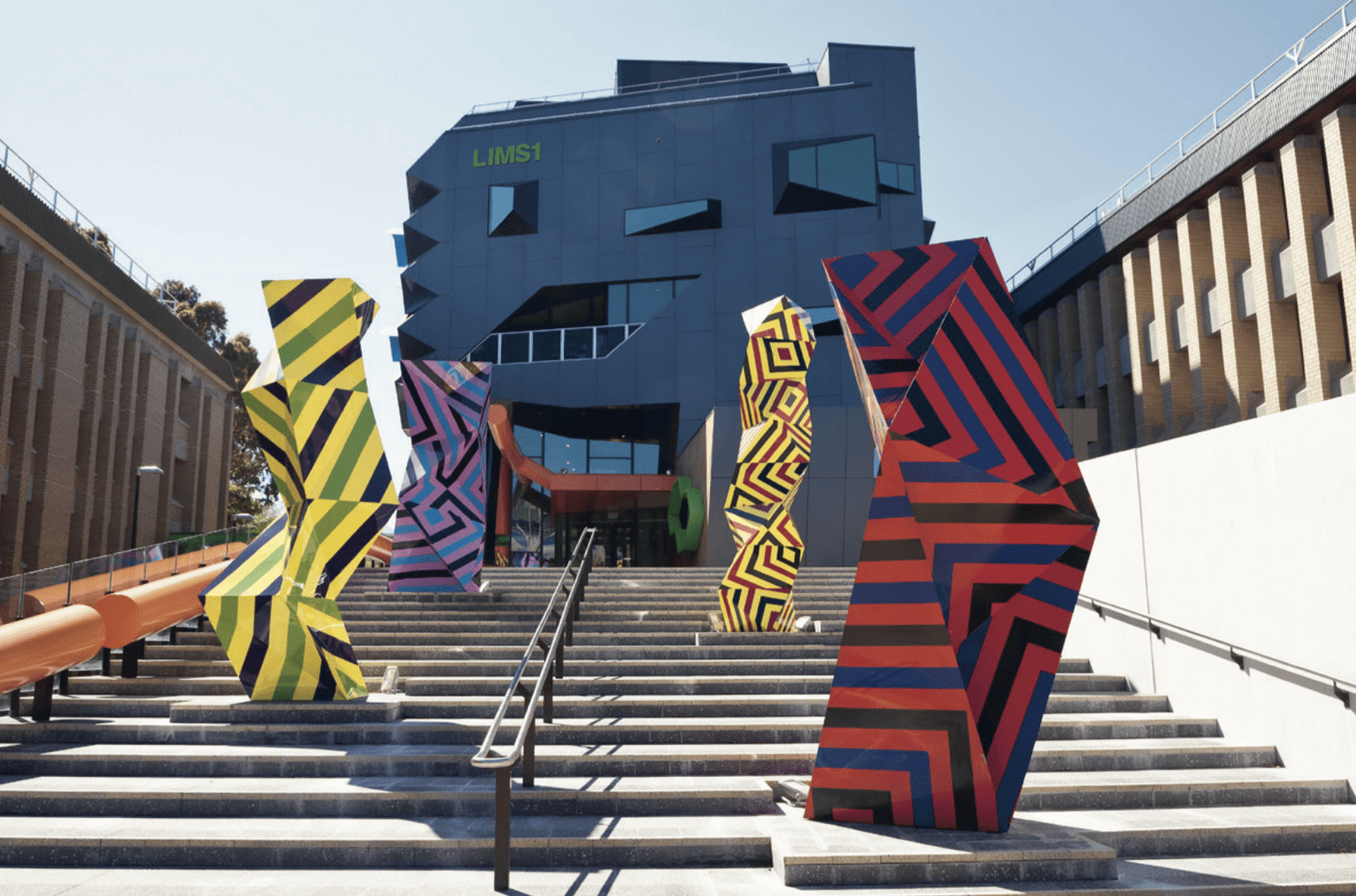 The La Trobe University Art Collection has been embedded in the university since its foundation. In fact, the La Trobe University Act of 1964 noted the importance of objects in the enrichment of cultural and community life, in the promotion of the University’s educational, scienti c and artistic development and the encouragement of free thought, critical enquiry and informed discourse. Thus, the Art Collection was established in 1966 by the University’s Master Architect, Roy Simpson (later the Honorable Dr. Roy Simpson, AO), before construction of the rst buildings were completed. It was part of the university’s original master plan to have works of art for the “embellishment of the University for the enjoyment of future students and sta ”, in public places around the campus. Simpson believed that art necessarily formed a signi cant part of the overall aesthetics of the University. Today, the ne art and social history collections of La Trobe University collectively number more than 10,000 objects, and are recognised for their broad signi cance to the Australian arts and cultural landscape. 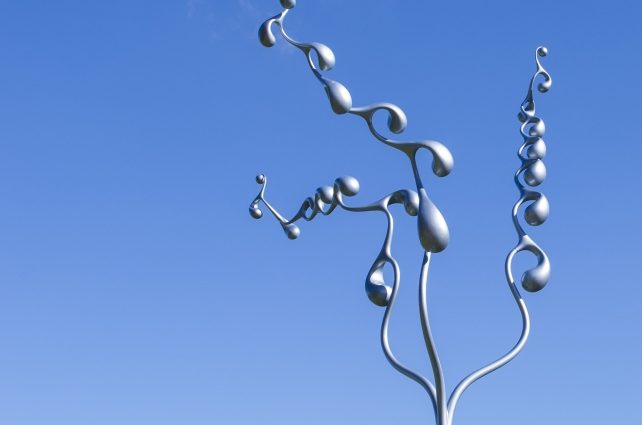 Murri Totems is a sculptural work by contemporary Indigenous artist Reko Rennie, commissioned in 2012 by La Trobe University for the new La Trobe Institute of Molecular Science facility. Phil Price, Chrysalid, 2014, carbon-fibre, industrial paint, stainless steel, metal bearings, 1080 cm (height). Donated through the Australian Government’s Cultural Gifts Program by Claire Mitchell, 2016 The La Trobe University Sculpture Park is nestled in the beautiful bushland setting of the University’s Melbourne campus, and features artworks from every decade since the establishment of the University in the mid–1960s. The collection features more than twenty works reflecting key movements and trends in contemporary Australian sculpture including pieces by Inge King, Allen David, Robert Klippel and Reko Rennie. The University’s large grounds and meditative gardens can be explored all year round, to discover, contemplate and enjoy this important collection of sculptures. Dr Roy Simpson commissioned Allen David’s glass screen in 1966 for the main entrance of the Library as part of the University’s Master Plan. Installed in 1967, this monumental architectural glass screen, is the only example of such a work by the artist in Australia.