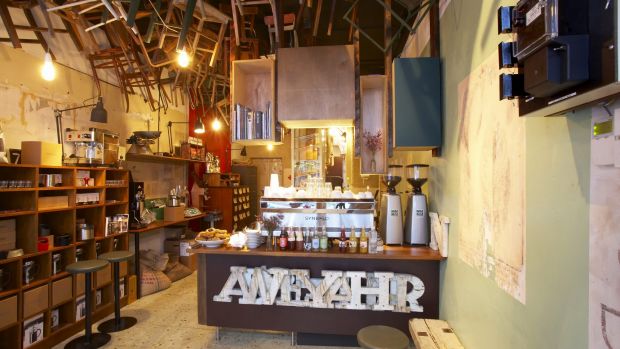 Are cafes the new seat of cutting-edge architecture?

Opening a cafe or bar used to be simple. Install a few second-hand chairs around a funky Laminex coffee-table and wait for the groovemeisters to hang. Today that might work ironically, but bespoke urban individuals demand difference. How did we get so spoilt?

Arguments over which cafe has the best coffee, or what’s the hippest laneway bar, owe much to architecture firm Six Degrees, pioneers in rescaling the local pub from a hotel to a hole in the wall. Six Degrees’ Meyers Place bar (1994) is ground zero for revitalising Melbourne’s laneway culture.  Aided by the new Postcode 3000 planning policy, Six Degrees demonstrated the possibilities of the city council initiative. They gave us choice – and character.

But the firm’s significance resides also in establishing a blueprint for emerging architects. Aptly named, Six Degrees connects the older generation with the new wave who continue to revitalise the city.

The lineage includes Breathe Architecture‘s Brother Baba Budan cafe in Little Bourke Street – which upended the second-hand chair aesthetic by hanging them like readymades from the ceiling. Then there’s Cassandra Fahey’s opium-den inspired New Gold Mountain, in Liverpool Street, city, and more recent cafes such as Industry Beans, designed by Figure Ground architects, a Fitzroy warehouse reconstructed from coffee pallets. The venues feature as part of Open House Melbourne this month, in a tour called Meet the Young Guns of Melbourne.

Hospitality has always been a testing ground to some degree or a more expressive place, says Alex Lake, Young Guns co-curator and a director at Therefore Studio, which redesigned the heritage-listed building Square and Compass in East Melbourne. Not only is it a method of communicating a breadth of ideas, but also it’s produced relatively quickly.

Increasingly cafes and bars have become the first public project on which architects cut their teeth.

Residential work could take two years to produce, whereas cafes and bars allow emerging practices to get work out there, says Lake. It’s also very public. It’s a strong factor for emerging designers to use as a stepping stone because people can relate to it and view it and understand it and interact with an audience they would only get through publications.

Over the past five years, with the rise of social media, design has become an important ingredient in boosting a venue’s popularity. It’s also led to more work for architects beyond bars and cafes to include small hospitality venues such as March Studio’s Baker D. Chirico in Carlton and Kristin Green’s Spring Street Grocer, which also feature on the tour.

[Industry Beans] put us on the map, says Figure Ground architect Matt Rawlins. It was one of those early projects that forged relationships and established a profile and got recognition and confidence.

Rawlins’ team transformed a 1980s concrete warehouse into a cafe with on-site roasting. Just as Six Degrees used recycled materials for both sustainability reasons and budget constraints, Figure Ground inventively used cheap timber pallets that carried the coffee. Part of the multi-award-winning design is its low-budget solution to a warm yet industrial feel seen in its lighting, fake steel I-beams made of wood.

Because there are so many cafes and restaurants, owners look for an edge, Rawlins says. Food had become on par with a lot of places and they realised that many of the successful design projects were attracting people. With social media, people were becoming more aware what a place might look like through the imagery.

While in the shadow of high-rise landmarks, these street-level bolt holes are small-scale landmarks in their own right, creating the fine grain of the city. They also represent value for money. Many of these architect-designed spaces remain unchanged yet utterly contemporary after a decade or more.

From small and experimental ideas, our design and cultural ideas grow out of these  … intriguing little things, Lake says. Sometimes they are quite humble and potentially people would walk past or not consider some of these small venues to be as significant as the other end of the scale, but these are the testing grounds that inform what ends up being the fabric of our social culture and hospitality and eating.

Meet the Young Guns of Melbourne, various locations across Open House Melbourne, July 30-31. A series of onsite talks with architects is scheduled. For details and a map, see openhousemelbourne.org